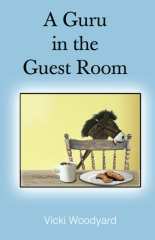 This funny book is about love.

Not romantic love or even sentimental love, but about the bottomless true love that is here always when we stop paddling around on the surface of ourselves and instead dive to the depths of Self.

Few swimmers will ever stop to notice the deeps of true nature, content to splash around in the unreal. But sometimes life tosses us a cement life raft, a sinker that will drown us to save us. In that case, we get to plumb the love we are by sinking on the heavy weight sufferings of grief, anger and desolation.

Vicki Woodyard, who lost a child and a husband to cancer, knows well that loss and loneliness not only break the heart, but also break it open.

In Guru in the Guest Room, Woodyard conjures an imaginary friend named Swami Z—a tough love teacher with a wacky sense of humor and a short, balding, bed-sheet wearing appearance. Over several chapters, as Swami Z bakes cookies in the author’s kitchen and holds make-believe backyard satsangs to a host of colorful characters, we begin to see that this two dimensional creation is coming to embody multi-dimensional truth delivered in clever one-liners.

Indeed, the blurry line between what is real and unreal is the very lesson that ripens from this conjuring of a swami who exists in the imagination of our writer, yet who clearly knows more than the writer knows she knows.

“The mystery of Swami is he doesn’t exist. No matter how hard I try, I cannot bring him to physical life. And yet he is a miracle worker. He has changed my life for the better and has taught me how to beg for self mercy until it hurts.”

This is not a plot-driven read, but rather a meander through a comedic, often wise and more often poignant teaching. There are lines to die for, like this one, “I never second guess love. That would be tantamount to breaking an egg before it is laid.”

Or this discourse, when Larry asks Swami, “If god is here and now, why aren’t we any different?” And Swami replies, “Because you are not here and now, you are here and then.”

The seekers that populate these fictional satsangs reflect back the awkward, broken and eternally hopeful in all of us.

There’s Larry, who lives in a trailer and rides a stick pony named Ruin (a pony who is rumored to be the real guru). Rose is forever digging in her purse or blowing her nose. And polyester clad Jim asks all the annoying questions. Larry rubs Vicki the wrong way through out, sparking her jealousy that he gets all of Swami Z’s attention to her conviction that this fellow with a greasy haired mullet and big pores is simply a loser.

Refreshingly, Woodyard writes her own character, Vicki, as 360-degree human, replete with a mean streak, a depressive side and brutal self doubt along side a relentless desire to love herself more and to surrender to inner peace. As Vicki confesses, “So Swami Z is nothing but a figment of my imagination and when I let Vicki be in the script I began to love her too. In fact that is the direct path to love for me. Loving the script and the characters.”

Vicki has a question that has been growing in the back of her mind for years, that near the books end she finally brings to Swami Z. “Will there ever be an end to this longing for love, this fear of losing love, this hope of winning love as yet unseen?”

“Let me tell you something that may surprise you,” said Swami Z deftly flipping a cobweb from the corner with his spatula.

“When you can contain the whole world inside your heart, they will never forget you, impossible. They will be unable to not love you. You will not have to beg for the leavings of love. You will have the recipe for love itself.”

Ultimately, this book’s main spiritual discourse is a non-dual take on the unreal nature of self (“I hope none of you are taking Swami literally, that is to miss the essence of the teachings, which is your unreality”).

But a strong subtext is about the frailty and resilience of the human heart, written from the depths of a writer who has loved deeply and lost profoundly. Her self-confessed abandonment fears come up again and again as she wonders if Swami Z will just leave her one day.

And then there is the one question that redlines through the narrative—how do we love wholeheartedly when inevitably we will be left alone?

I’ll let the characters answer that one.

Vicki’s book is available on kindle and paperback at Amazon.

(this review was first published in elephant journal).

4 thoughts on “A Guru in the Guest Room {Review}”