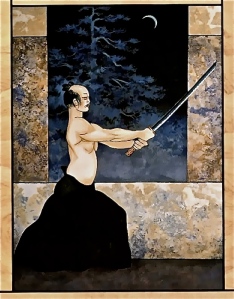 A reader recently asked me, “What I really want to know is what lead to your awakening? What life were you leading that contributed to this event?” He wondered if there was a certain way to cultivate a fertile ground for enlightenment, a kind of prerequisite plan.

Well, for one, by the time I awoke from the dream that I was a separate self, the enchantment of being Lori-Ann had all but worn off. Like wall paper which had begun to fade and peel, the near fifty years of living under the spell of selfhood was lifting. As this trance loosened its grip there glimmered underneath the façade of “me”, something brilliant by comparison.  Then one day the wallpaper-thin self just fell away entirely, revealling a spacious vast nothingness full of life.

Even so, a spontaneous awakening is probably not really instantaneous, even if it looks to be sudden. In my life mini-awakenings happened over the years, tremors before the big earthquake which demolished the fortress of illusory self.

What defended that fortress is interesting. I call them the last soldiers standing, my last cherished beliefs and tenacious self-identifications. It’s entirely possible, had these soldiers stood their ground, I’d still have snapped awake from the dream. But looking back, I can see four Rambo-strength beliefs that arguably had to die before the edifice of self could crumble to reveal the vibrant ground of no-self. So, in the spirit of story telling, here are the bad guys (who thought themselves heros) who went down fighting for the unreal Lori Ann.

The Ambition Soldier: As an overachieving first born A-student, I expected my life to be all about success. I measured this by how well my creativity was received in the world, particularly my writing. By age 30, I was winning short fiction awards, being published in literary journals, and had been accepted at one of the top creative writing programs in the US. And then came the next ten years of drifting in and out of dull newspaper jobs while the muses stopped talking to me. By my late thirties I felt like a failure—a housewife instead of a mid-wife to brilliant fiction. One day I simply realized that it didn’t matter if I was a worldly success. What began to matter were the ordinary moments, the richness of each breath, the inexhaustible discovery of truth. I went inward instead of outward, and began the phase of seeking God. Ambition was dead. I just hoped God was alive.

The Control Soldier: Growing up, I noticed many of my nocturnal dreams would show up as future events and many of my hunches came true. By my twenties, I was learning the art of prophecy, playing with Tarot cards and divination tools like the I-Ching and Astrology. Eventually, I weaned off props and developed pure clairvoyance. I got so good in my mid-thirties at seeing the future, I ended up on TV and radio shows, in a BBC documentary on remote viewing, and with an international client list. Then life played a trick on me: the more predictability (or control) I sought, the less I experienced it in my life. The sudden deaths of my parents before I turned 40, and the near death of my son in a car accident, assaulted my belief in control. When my son was almost killed a second time in a violent attack, I was 45 and ready to realize the obvious: control is an illusion. Life is a ride without a steering wheel. Instead of feeling scary, this came as a huge relief. Look ma, no hands!

The Sex Soldier: For years I had connected my sexuality to my lovability. I was worthy of love because I was sexually expressive and sexually available. In relationships this translated to a lot of focus on sexual exploration, play and intensity, to the point of even studying and practicing tantra. Then menopause hit and suddenly my sex drive began to plummet. This created friction with the man I live with, who had signed up for a woman who loved sex. Now I was barely interested. This created angst in me: I was no longer able to use the currency of sexuality in a barter for love. Then, just before I woke up, I attended a weekend retreat with American-born teacher Ganga-gi. In that retreat she asked us to really look at the story of self, the tale of who we imagined ourselves to be. In this, I saw with blinding clarity how I had created a sexually free and adventurous persona as an anti-script to my parents’ sexless marriage.  In all my sexual exploration, I’d never considered the territory of celibacy. Suddenly it became clear: sexually active or celibate were both equally fine options. I was okay because I was not a sexual being as much as I was being sexual. Now I could simply be.

The Relationship Soldier: Perhaps because my parents demonstrated unhappily-ever-after, I was determined to create a fairytale love life. When my 17-year marriage failed to make me happy, I divorced and embarked on a seven-year spree of serial monogamy. The perfect relationship, the one partnership that would finally stop the quest, never materialized. Instead I realized the well being I sought through relationship to other, was an illusion. This came crashing home just before I woke up, when the man I live with began signaling discontent and a desire to leave. Out of sheer exhaustion, I realized I was ready to be alone. Alone was just as good as together. Suddenly, romantic relationship fell away as a requirement for contentment. If I was alone for the rest of my life, that was okay. If I was in a partnership until the day I died, that was okay too.  Equanimity had miraculously arrived.

The last two soldiers standing, sex and relationship, fell in the two months before I woke up. They were the hold-outs, fighting to keep the edifice of self from collapsing When they gave up the battle, there was nothing to impede the movement of grace, which like a tidal wave, washed the Self away.

I dreamed one night that a meteor shower rained down on the earth, and I had no place to hide. No refuge from this fiery annihilation. And so I surrendered to the inevitable and sat on a dream hilltop waiting for death to take me.  The next morning the self I’d known for 49 years, was dead. Instead there arose an empty vast stillness and a quiet delight.

So I ask you: What are your last soldiers standing? And are you  willing to let them fall?