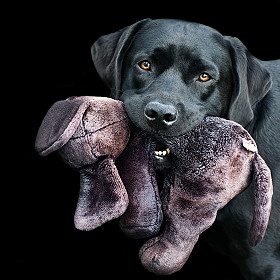 I have a pet theory, no pun intended, that God is really a dog. Forget a bearded fellow on a throne, a crafty one-eyed Odin, or any number of fierce sword or skull wielding goddesses. Even forget softies like compassionate Kwan Yin or hearth-tending Hestia. God has four legs—meaning any anthropomorphic diety clearly is two legs shy of perfection.

How do I know God is a dog? Well, dogs have always taught me more about divine nature than any Sunday school program or ancient wisdom text. And I figure if God is going to reveal itself to mortals, it’s going to be cleverly. What smarter way to blend in amongst us than as man’s best friend? I mean, angels are a rarified breed who make fleeting cameos and never stay as houseguests. But dogs have insinuated themselves into our yards, homes, and let’s face it, beds. Yes, God walks and sleeps among us on all four legs.

So, here are five things God, disguised as my dog, taught me about True Nature. (By that, I mean the stuff I am made of, God is made of, and you are too).

God is a Player.  I’m not saying God is a womanizer (that would be a play-a) but rather God has a fondness for frolicking fun. Chasing the ball is the tip of the good-times iceberg. Tag with other dogs or endless hours in delight at making the squeaky toy squeak, all point to True Nature being insanely playful.  As Osho says, “The moment you start seeing life as non-serious, a playfulness, all the burden on your heart disappears.” Bottom line: Dogs are here to remind us that “all work and no play” is a surefire recipe for a heavy heart and a sign you have forgotten you are play incarnate.

God is Curious. As a kid, my favorite book series was about a curious monkey named George. But it wasn’t until I got my first puppy that I realized monkeys have nothing on dogs when it comes to the relentless desire to investigate—what’s under the rug, the flower bed, the bed covers. Ever watch your dog’s face when you are acting strange? That tilted-to-side head as your canine tries to figure out WTF are you doing? No way you are going to be ignored while wailing in grief or whooping in joy. Your dog is perpetually curious, about you and the world.  You, as true nature, are also curious about this odd creature called (fill in your name) and the apparent material world it inhabits. True Nature, like your dog, knows it’s a soul having a body-centered experience, not a body having a soulful one.

God is Forgiving.  You only have to screw up badly with your dog once, to know this creature has a built-in forgiveness drive. We are not talking abuse, that creates a fearful and helpless animal (and even then, dogs are willing to remain loyal).  I’m talking mistakes, like letting my puppy sit in the front seat of the car and then (after screeching to a halt to avoid that other car) having to pick up the whimpering fur ball from the floor. Or the time I left the carnations on the coffee table (dog poison alert) and my dog spent the next day vomiting red petals. Or even the time I ranted hysterically about the umpteenth pee puddle that day, sending the puppy into hiding beneath the bed. Despite all my bad behavior, my dog refuses to stop licking my face and loving me. God is like this. You heard the cliché, but it’s true: God, like your dog, loves unconditionally.

God is Protective. Yes, you heard me right. God is a lot like a ‘good shepherd’ and guard dog rolled into one, noble and vigilant in watching over us. Where a dog will sacrifice its life to save us from a rampaging bear, God will also step in to save us from ourselves. This salvage has been called “salvation” and involves the rescue of our divine nature from the illusion we are mortal. Enlightenment is simply the waking up from the dream of mind, the dream that says I am separate and I am solo. Like a watch dog that keeps intruders at bay, God keeps scaring off the mistaken beliefs that anchor us in a false reality. By the way, God barks a lot like a mastiff, in basso profondo. None of that yippy, high-strung, small-dog stuff.

God is Evolving. If your eyebrows raise at this revelation, just relax into the possibility that the eternal, unborn, unchanging Self is also exploring the impulse to grow and change. Dogs as a species point to this – from wolf ancestry, canines have mutated into a huge array of domestic helpmates, in all shapes and sizes. Shepherds, bird dogs, guard dogs, lap dogs are just some of the permutations that god has explored in her manifestation as dog. Granted, we have shaped the trajectory of the species, just as God is surely shaping the trajectory of humankind.  Andrew Cohen, in his book Evolutionary Enlightenment, has the same idea. He says,  “God is always desperate to grow. God is infinite in the unmanifest realm. But in the manifest realm God is not infinite—God can only know him or herself to the extent to which conscious beings are actually able to awaken to their own absolute nature.” In other words, we are infinity playing in the land of the finite and learning about our Self through growth and change.

Since I woke up from my dream self five months ago, life has unfolded with an unparalleled freshness, wonderment and innocence that I’ve imagined is a lot like being a two year old for whom the world is so brand new. If I feel like a toddler, then what about dogs, who are really God? In 2009 researchers determined that according to several behavioral measures, dogs’ mental abilities are close to a human child age 2 to 2.5 years. God is a dog. I rest my case without even having to spell God backwards.

10 thoughts on “Five Things My Dog Taught Me About God”